This all started many years ago with at least 35 years young the series was represented by the die-hard enthusiasts whom found a way to grow their love of motor cars and have fun at the same time. There was a split of race interests as the older statesman had the classic car formula and the newer and more modern steeds of the day had nowhere to race. Many of these were their daily mode of transport for the wives and enjoyed by the husbands on weekends getting thrashed around the race track to unleash those always needed ego boost and tales to be told afterwards in the watering hole of their choice.

The series started with a small but dedicated group of guys, some still around today to create this formula which changed face and names over the last 30 odd years but still lovingly known as Clubman’s Racing, this formula has had a huge following from the supporters over many a year and the drivers and their families have always been a family matter helping each other and racing to the bitter end. On race day they stick together lending the odd word of advice or jumping in and fixing each other’s cars but once on the track it’s each driver for themselves, men and ladies of all age groups bash the living hell from their steed of choice to complete what to them might be the race of their lives.

As time and technology has evolved the cars have gotten faster and better quality of vehicles emerged for the onslaught of making the formula a success but also prove to themselves that they are the best out there no matter what. Different cultures have grown to be one and there is a spirit of pride when they go and collect the silverware on the end of days racing as everyone chats for hours afterwards of their efforts and exploits after the day’s activities.

In current state we have a vast array of manufacturer’s vehicles making up the grid from Audi to Volkswagen, Bmw and Opel. Anything goes as long as the rules are met and the obligatory MSA guidelines are followed. The championship victor still receives his Western Province colours after all his efforts to place more pride on his mantelpiece come year end.

Clubman’s racing has a class based formula subject to various race lap times with a cut off at the 1 min 21, 5 sec mark, thereafter the weight becomes a formality, the faster you go the more weight you carry until you fall back again. Other classes are similar in the sense, the faster you go, you move up a class higher until class A where the weight rule applies. The first race of the car and driver will be in class X until you have posted a time to be classified in.

Sponsors have and always will be a major part of this sport and without them we as drivers are wasting all our efforts as we need to give a show and how better than to proudly display the sponsors on the vehicles to be associated with that winning combination. We are immensely proud and wish all our sponsors of our series which is currently the Midas Clubman’s series as well as the associate sponsors a valued and mutual rewarding stay together for many a year to come. The private sponsors whom aid the drivers we applaud you as well as without all of your help we are fighting a long and hard struggle ahead. 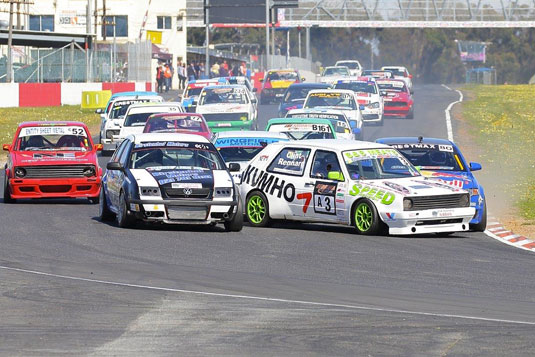 We are currently a strong category and wish to continue for years to come and invite all of our valued spectators to spend the day with us enjoying the battles we bring to the fore, we wish to thank all the people associated with our success story and are proud to have you on board.

Here is the link for the Clubmans Website Clubmansracing