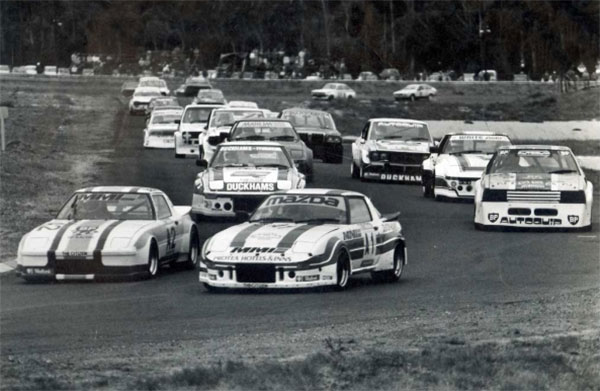 While the “new” circuit at Killarney is already well past its Golden Anniversary year, motor racing in the Cape began long before that.

The Mets (Metropolitan Motorcycle and Car Club), that was originally a predominantly motorcycle outfit, was formed in 1928. It was followed in 1938 by the A.A.R.C (Amateur Automobile Racing Club), one of the other partners in the eventual coalition of the four clubs that formed the W.P.M.C.

Killarney first saw action in 1947. And no history of the W.P.M.C., brief and incomplete as it may be, can be written without reference to its development.

It all began when the Divisional Council bypassed what was then a section of the main road to Malmesbury, at the Potsdam Outspan. This disused stretch was then acquired by the Mets for drag racing – or sprint events as they were first called. A section of the original road, picturesquely flanked by bluegums on both sides, still does duty today as our access road running from the main gate (now only used on race days), to the subway.

A major breakthrough came about shortly afterward when a link was built to transform the strip into a very basic circuit. Shaped much like a narrow triangle, it incorporated a tight hairpin, the remains of which can still be seen in the spectator area next to the Coppe Shoppe. It then linked near the subway before rejoining the original stretch.

In 1952 the Tower Bend and the Big Sweep were built. The potholed remains of these corners are today incorporated in the stretch of tarmac that circumnavigates the clubhouse, from the subway to the infield area. An urban motorsport legend has it that Billy Kay, the then chairman of the Mets, painstakingly measured the new circuit with a dressmaker’s tape measure. He eventually concluded it was 5 562 ft. X 9 ins. long, which translated into the modern idiom becomes 1.65 kms.

Killarney was raced in this form for several years before the final addition to the “old” track, a loop down towards what is now the Cape Town Corner, was constructed. Before this was completed there was considerable discussion as to where the Start/Finish should be located. It was finally agreed that this key position would be sited pretty close to where it is today, although all events on the original circuits were raced in an anti-clockwise direction.

During this period the motocrossers who had begun on the beach and in the dunes at Noordhoek and Sandvlei, also joined the club. Finally, with the formation of an active Drag section, Killarney became the first true motor sport complex in South Africa.

In 1959/60 the club negotiated a loan of R40 000.00 with the Cape Divisional Council for the purpose of building a new circuit to the then Formula One International Standard (1500 cc cars such as Lotus 18 and 22, that were slower than

a current Formula Ford). Raymond Reider was Chairman of the Mets Club at the time, the circuit was designed by Edgar Hoal who also supervised its construction. Most of the negotiation with the Divisional Council was conducted by the Club President, Mr. C. Stanley Damp.

The Western Cape then had its first taste of international Formula One Grand Prix racing when the Cape Grand Prix was run at Killarney on December 17 1960.

The following year the Grand Prix was promoted and organized by the Tex Kingon Racing Committee (a committee drawn from all of the Cape Town motor sports club). Drivers like Stirling Moss, Jo Bonnier, Jim Clark, Taffy von Trips and Trevor Taylor competed in those events with spectator attendances of between 10 and 12 thousand people. Unfortunately, the promoters and organizers in both instances over-extended themselves, ran at a loss and were unable to pay anything to the Mets Club for the hire and preparation of the circuit. In consequence the club could not meet its annual loan repayments to the Council….

On 30th November 1964 the Mets Club was informed that the Divisional Council had cancelled the lease and loan agreement and would retain ownership of the land and any improvements that had been affected.

Realizing that they would have to somehow find the resources to repay this loan, the Mets formed a new committee to firstly find the money and then to invite the existing clubs in Cape Town to bury their differences and their individual identities in a new, strong, unified club for the good of motor sport.

Thereafter amid some die-hard opposition from some older Club members the Mets, the AARC, the Cape Rally Association, the Kape Kart Klub and the Motor Sports Marshals Association combined to form the Western Province Motor Club. The first Chairman was Adrian Pheiffer, who was followed by Ted Lanfear, Ronnie Hare and Denis Joubert.

Over the years, facilities were added. Benefiting from the Tex Kingon Committee’s unfortunate experience in the early sixties, the WPMC never overreached itself and an ultra-conservative finance committee led by Denis, always ensured that the money was available to meet any commitment.

The hard fisted Joubert reign eventually spanned an incredible 36 years. It was aided by his architectural ideas and prowess that resulted in the construction of the open and closed pits and an ever increasing number of garages that are lased to competing members. A string of company hospitality areas sprang up around the track at about the same time. There was also the clubhouse that progressed as funds became available and eventually was only initially completed after more than two years. There have since been several more changes and improvements. The imposing new pit block, restaurant (The Trackside Pub and Grill), and viewing stand, on the other side of the start / finish straight, was his final effort before retiring.

Denis was followed by Brian Smith who sadly, died while still serving his term of office. Gavin Cerff is the current chairman and Des Easom is the executive manager tasked with the day to day working of the club.

The Bridge Has Gone.

That’s right. After spanning the main straight for over 45 years, the renowned Goodyear (nee Dunlop) Bridge was finally consigned to the cargo hold of a tramp steamer on its way to a port in China. Once there, the remains were due to be melted down, before resurfacing somewhere, probably as a selection of burglar bars or braai grids.

A somewhat ignominious end to a landmark that has dominated the local circuit’s skyline since the days when the only other feature higher than the tops of the open ended pits of the time, was a line of young bluegum trees along the back straight. When its reign ended the structure had starred in more photographic background roles that any other single item at the complex.

On reflection, extend that claim to any circuit in South Africa.

Strategically situated, just past the start and near the entrance to the first corner, it also became a traditional brake mark. So much so that complaints from disorientated competitors after it was removed, led to metre boards indicating the distance to the bend, being placed near where the structure once stood.

Originally sponsored by Dunlop Tyres, it was constructed to coincide with the final redesign of the track, before the first Caltex Cape Grand Prix in 1960. At the time it was an unashamed replica of the even more historic Dunlop Bridge at Le Mans.

Although the original job description had it filling the role of a pedestrian link to the clubhouse, it later became a unique commentary point that enabled the mike-men to observe cars and bikes coming straight at them before passing under their legs, as it were.

Unfortunately it was also associated with several less pleasant motorsport incidents over the years. The first, and certainly most bizarre of these, occurred in January 1972, only seconds after the start of a national Cape South Easter meeting.

The Formula Atlantic McLaren V8’s, driven by Paddy Driver and John McNicol slewed off the line after McNicol attempted an impossible passing manoevre and the two collided during the initial pull-away.

Heading straight for the base of the bridge, the wheels of Driver’s single seater climbed over McNicol’s, launching his car sideways and almost two metres into the air before they both slammed against the structure. Fortunately, although visually
horrific, neither driver was seriously injured.

And while the covering was repainted and refurbished more than once since that day, providing you knew where to look, the head high indentation left by Paddy’s flying McLaren remained visible until the breakers delivered the last rites.

Sadly, as speeds increased and competition – especially among the steel caged saloons –became fiercer, the bridge was soon the scapegoat for almost every accident that occurred in its proximity. But regardless of what drivers said in their reports, many of these were due to impetuosity and errors of judgment that had nothing whatsoever to do with its perceived menace. Despite that, it was decided that as part of the comprehensive safety upgrade that was under way at the circuit, that the structure would have to go.

The original has since been replaced by a possibly less imposing but far more practical Liqui Moly structure that links the old and the new pit blocks. 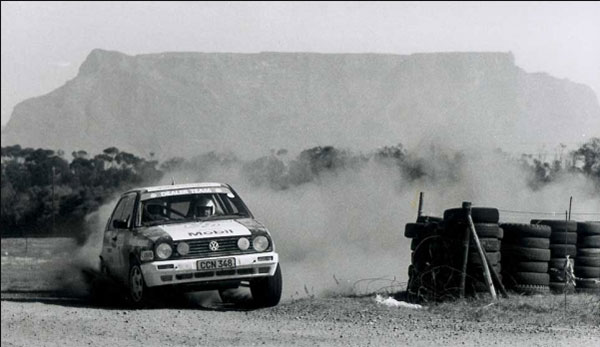 This is a tough one. There have been so many great races over the years that to be fair, the honour will have to be shared by pretty large group of drivers and riders.

However, if there just has to be one worthy of special mention, then because of its international status and the characters involved, we’re giving it to the 1965 Killarney 3-Hour.

A round of the Springbok Series, it attracted entries from the likes of Australia’s outrageous Paul Hawkins, Britain’s sublime David Piper, BRM F1 driver Richard Attwood and other top international guys — and with 180 minutes of sheer drama, it had it all.

This award has to go to our incredible SuperTruck meeting in December 1999. Sponsored by Continental Tyres who did it in style by bringing out all the competing trucks, plus their huge transporters in a fleet of cargo ships.

However, what surprised us most was that despite this form of racing having never been seen in South Africa before, while overseas events had not received any prior publicity, the news spread like a bush fire on Table Mountain and we were inundated with requests for tickets.
We hardly even had a chance to add to flames by telling them the trucks had engines that produced 1,500 bhp and 5,400 Nm of torque.

They just wanted to see them in action. And when they did, they wanted more.

The sad part was that the cost was apparently considerably more than Continental had budgeted for, so there was no chance of their return.