Posted at 14:10h in Latest News by editor 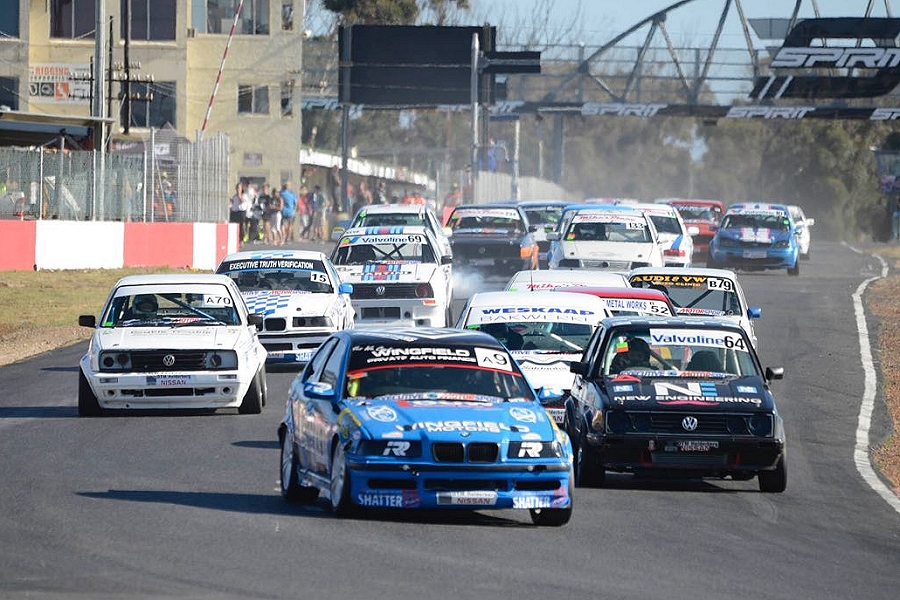 Round 4 of the Power Series sponsored by Wingfield Motors at Killarney International Raceway on Saturday 8 June promises a bumper programme (if you’ll forgive the pun) of top-class racing in every regional category from classics to Formula Libre single-seaters, headlined by the Mikes Place Clubmans Saloons.

This ‘anything goes’ category has attracted a full grid of 57 cars, led by the Class A ‘big guns’ – Clint Rennard (G&A Golf 2L), Danie van Niekerk (Wingfield Motors BMW 325) and Michael Le Sueur (New Engineering Golf 1). With a field this big, however, everybody has someone to race against, and there will be epic duels fought out in all six classes, notably in Class B, with Cody Alberts (Alfaholix BMW 330 3L), Paul Munnik (Auto Clinic Golf 1 Gti) and Mansoor Parker (Levy Motorsport BMW E30) ready to set the pace.

The Burly Pro GTi Challenge has a somewhat smaller entry, but the racing is likely to be even more hectic in this ultra-competitive Volkswagen-based series, with Jurie Swart (Alpine Polo 6 2L), Nian du Toit (Allied Jetta 3 2L) and Jano van der Westhuizen banging door-handles all round the circuit.

Class B is likely to be a straight fight between Eden Thompson (Jetta) and Gideon Serfontein (Goeie Hoop Golf 2 1.8L), while Class C will be more a case of Giordano Lupini versus the rest as the talented teen continues to turn an unprecedented run of bad luck into a string of decent results.

The Millstock Classics and Shatterfix Fine cars will run together as usual, producing an impressive field of 45 cars. Malcolm Uytenbogaardt  (Carters Granada) and Erik Mouton in his big blue Chev De Ville V8 set the pace in their last outing, but this time they will face stiff challenges from the Big Noises – Dave Kopke’s notoriously loud Mazda R100 rotary and Robin Forbes’ 5.7-litre Chev Corvette – as well as Franco Donadio in the ‘giant-killer’ Ford Escort Mk 1.

In the Fine Car category you are most likely to seen Arnold Lambert (VW Jetta) battling it out with father Mauritzio (VW Passat) and son Robert Toscano (Technoparts MX-5) for class honours, with Jan Koekemoer the possible dark horse.

The RST Suzuki South Superbike races will bring together the big three of regional racing for what promises to be another epic showdown. Hayden Jonas and the Samurai R1 are unbeaten so far this year, but the reigning 600 Challenge title-holder hasn’t had things all his own way by any means. Former regional Superbike champion Ronald Slamet on the PLM Motorsport R1 has been right there with Jonas throughout the season so far, often less than a second adrift at the line. 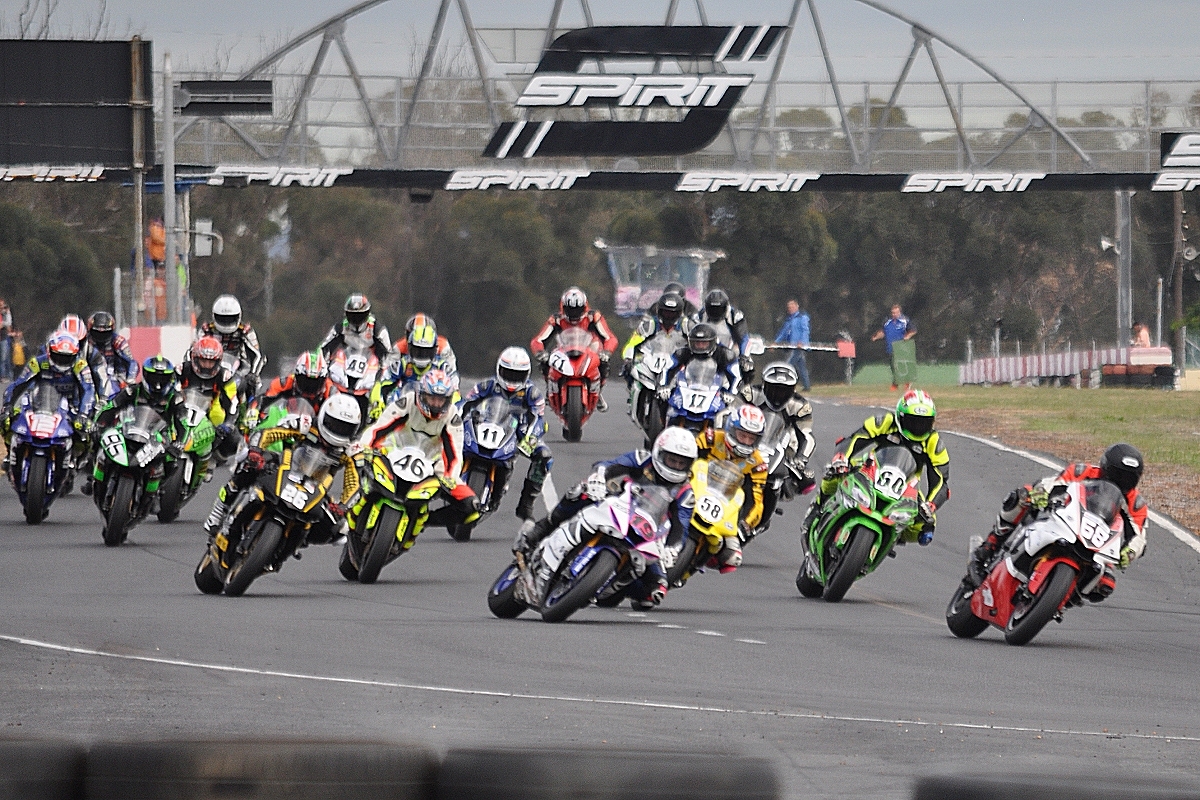 The two have given fans some cliff-hanger dices, changing places on almost every lap in some cases, and it’s only a matter of time before Slamet makes a pass that sticks, to break Jonas’ winning streak – although the supremely confident Jonas, at the top of his game this season, will tell you different!

Keeping these two hotshots honest is veteran Trevor Westman, flying the Kawasaki flag on the Mad Macs ZX-10R. Westman has been too many times a bridesmaid and never a bride, but the Mad Macs Kawasaki is more competitive than ever this season and Westman has been in the mix at almost every outing. If ever there was a time for him to upset the established order, this is it – and he knows it.

The scenario in the Super Masters class for riders over 35 is a little different; rivals Rob Cragg (Mad Macs ZX-10R) and Quintin Ebden (Milu R1) may be too busy dicing each other to catch the family-funded Kawasaki ZX-10R of super-smooth Malcolm Rapson, who has been dominating the class since his return from injury earlier in the season.
But even if they’re scrapping over second and third in class, the Cragg/Ebden duel is always worth watching – especially when Super 600 star Kewyn Snyman throws his 600cc’s worth into the debate.

The reigning SA Super Junior champion graduated to a Hillbilly Racing Yamaha R6 at the beginning of this season and was on the pace from his very first outing, both in Nationals and at Regional level – so much so that he has been running with the second tier of litre-class bikes, among them Cragg and Ebden, in Power Series racing. Watch this young man; we predict great things for him.

With Chris Williams and the Trac Mac ER650 back in the mix, Powersport A is going to be an uphill battle for anybody else, but Class B is wide open. Look for teenager Jessen Samaai (KTM RC390) and veteran Tony Sterianos (RST RC390) at the front of the class – because wild child Connor Hagan has moved up to Clubmans on the NPH CBR600, where he will face Wayne Arendse (Kawasaki ZX-10R) and Paul Medell, who was Western Province champion on a Honda CBR600 F4 five years before Hagan was born!

As always, arch-rivals Marcel Angel and Fabio Tafani will be the drivers to watch in the one-make V8 Masters races, with Sean Moore and veteran Brian Evans to keep them honest. The situation is a lot more fluid in the Makita Supercar category, however, with Martin Bensch and Glen Phillips finishing just 0.001sec apart in second and third respectively behind class leader Ryan McCarthy last time out – and not very far behind at that!

The  Pirelli Sports and GT field makes up for lack of numbers with the sheer breathtaking speed of the leading competitors, among them the Maui Ginetta G57 that holds the ultimate lap record for this circuit at a blistering 1min 06.745sec. Challenging Craig Jarvis in the big Ginetta will be the fire-breathing Porsche GT2R of Johan Engelbrecht, with Mike Verrier (Aidcall 247 Nissan Shelby Canam) and Steve Humble’s Harp Motorsport Opel Mallock 14B.

For those who believe that a real racing car should look like a shark on wheels, the Formula Libre single-seaters will provide their own mini-Grand Prix, with Damian White the pre-race favourite in a two-litre VW 89 Ray. He’s unlikely to have things all his own way way, however, with Andrew Rackstraw (RDSA Reynard 2L), Winston Jardine (RBR Reynard 2L) and Sean le Riche (Seleca Mygale 1.8L) in the mix.

There will be fine food and ice-cold drinks available at the revamped, upmarket Trackside Pub and Grill, upstairs at the Clubhouse, light snacks and even colder drinks at the New Pits Lounge and the Karting Clubhouse.

Watch all the action, captured by cameras all around the circuit, as well as live timing, on TV screens on the Clubhouse Balcony and in the New Pits Lounge, or hop on the free Hyundai Shuttle and watch it live from exciting vantage points all round the circuit.

Race Day at the home of motorsport in the Western Cape provides fun and entertainment for the whole family, with pedal karts, jungle gyms and more for petrolheads-in-training, marshalled by trained minders, at the Clubhouse Kiddies Korner and below the New Pits Lounge.

Parents of toddlers are welcomed to the Kiddies Korner nursery, where you’ll find fridges to keep juice boxes cold, nappy-changing and breastfeeding facilities, as well as toilets and wash-up facilities for running repairs.

The Clubhouse Kiddies Korner is now also available for children’s parties – contact the Western Province Motor Club at (021) 557-1639 for details.