The weather gods turned up the heat at Killarney International Raceway on Saturday 7 September for the Flower Power Series sponsored by Wingfield Motors with support from media partner Kfm 94.5, and the action on the circuit was even hotter.

Danie van Niekerk qualified his new Wingfield BMW 325 E36 third on the Mikes Place Clubmans Saloons grid behind Cody Alberts’ Alfaholix BMW 330 3L and the New Engineering Golf Mk1 of Michael le Seuer, but when the dust settled after a hectic 37-car start in Race 1, it was Clint Rennard (G&A Promotions Golf 2L) and Van Niekerk who were jockeying for the lead in a battle that went right down to the line, with Van Niekerk in front by just 0.115sec, and Le Seuer a further 2.5 seconds adrift in third. 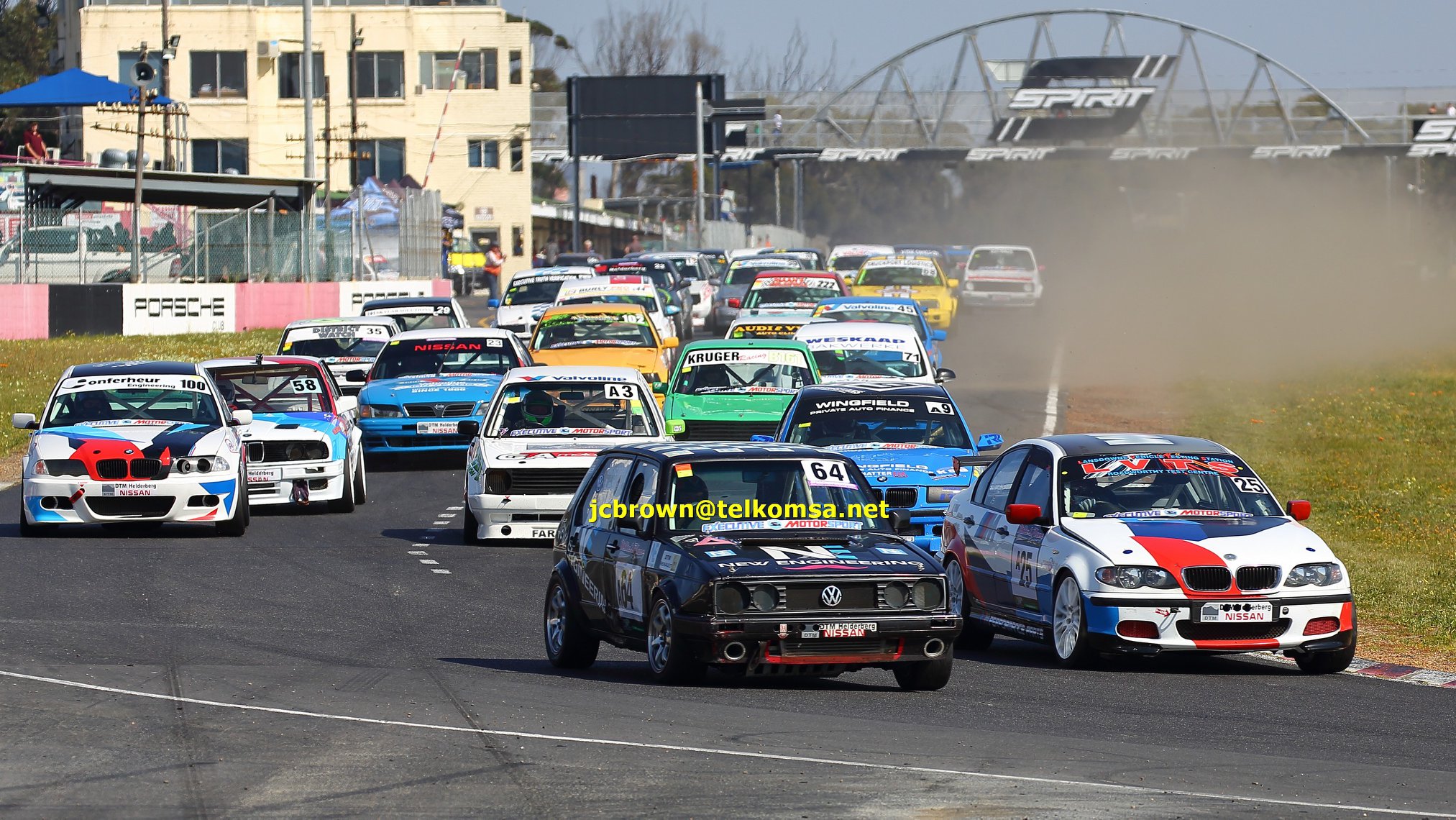 Van Niekerk grabbed the lead from Le Seuer on lap three of Race 2, only to drop back a lap later and go out altogether on lap six, leaving Rennard and Green to battle it out for the lead. They finished in that order within 0.547sec, with another Class B driver, Mansoor Parker in a Levy-sponsored BMW, a distant third – less than three seconds ahead of Swanepoel.

Pole-sitter Nian du Toit (Allied Fibreglass Jetta 3) led the Burly Pro GTi Challenge field off the start but had to pit on lap two to sort out a throttle linkage problem, leaving Jurie Swart Jr (RDK Plant Polo 6) and Jano van der Westhuizen (Wingfield Polo 6R) to settle matters between them. They crossed the line within less than half a second, with Swart ahead when it counted, and Colin Meder (International Tube Polo) a distant third.

Swart followed Du Toit’s Jetta all the way in Race 2 but couldn’t make a move that would stick, finishing just 0.226sec off the pace. Van der Westhiuzen was third and Meder fourth, with Mario Roux (Automar Jetta 2L) topping Class B in 8th overall. Lupini’s Golf overheated and lost power, dropping back until, out of the points on the last lap, he parked it two corners from the end to save the engine. 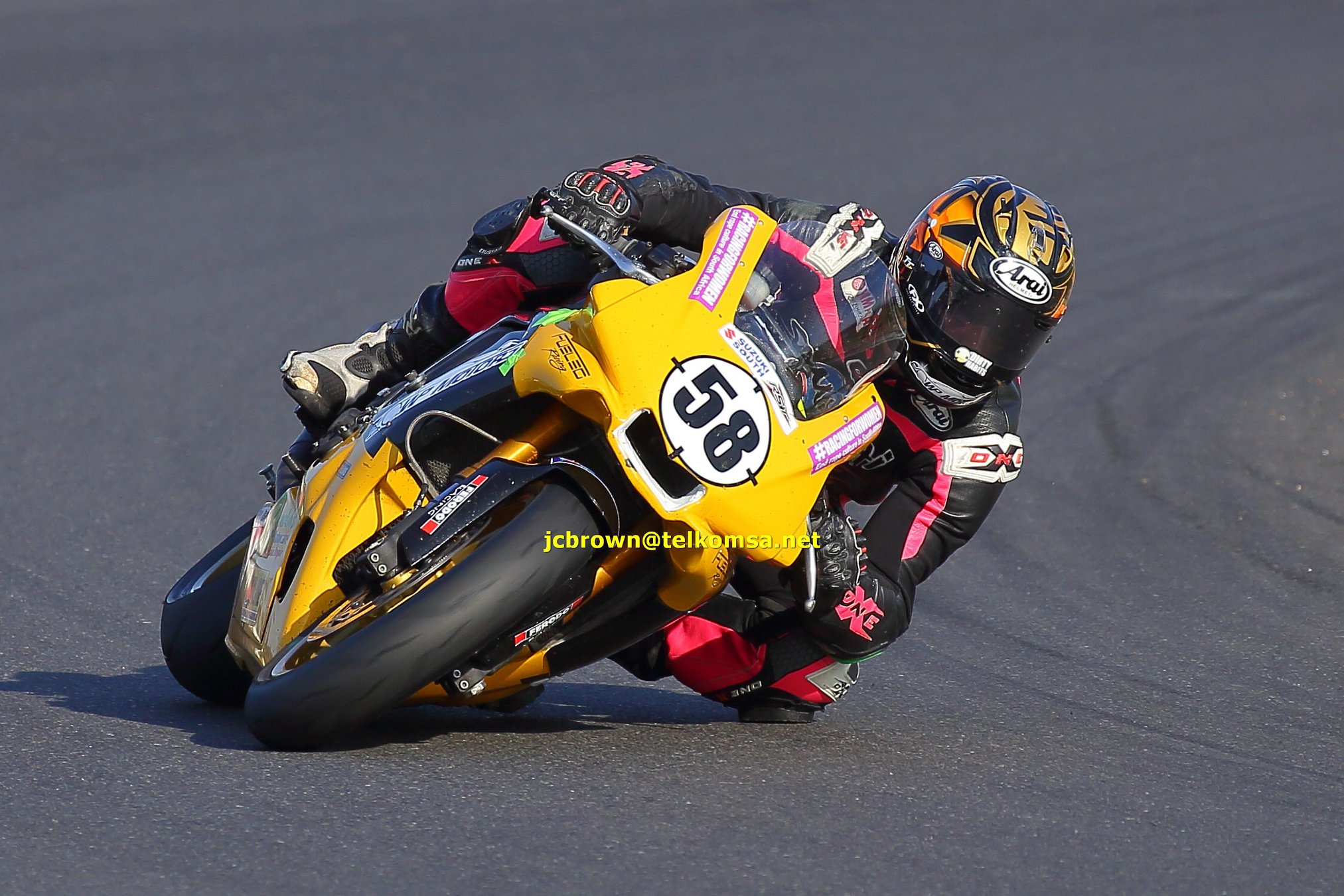 At the climax of a superb day’s racing in the two-wheeled categories, Hayden Jonas and the WP Motors/Samurai R1 walked away with the 2019 RST Suzuki South Superbike championship – on his 21st birthday!

With four races still to be run in his rookie season in the premier class, Jonas has scored an incredible 12 wins and two seconds from 14 starts and cannot be beaten on points, giving him an impressive seventh regional title in nine years, across all classes – but the scoreline tells a tale of its own. 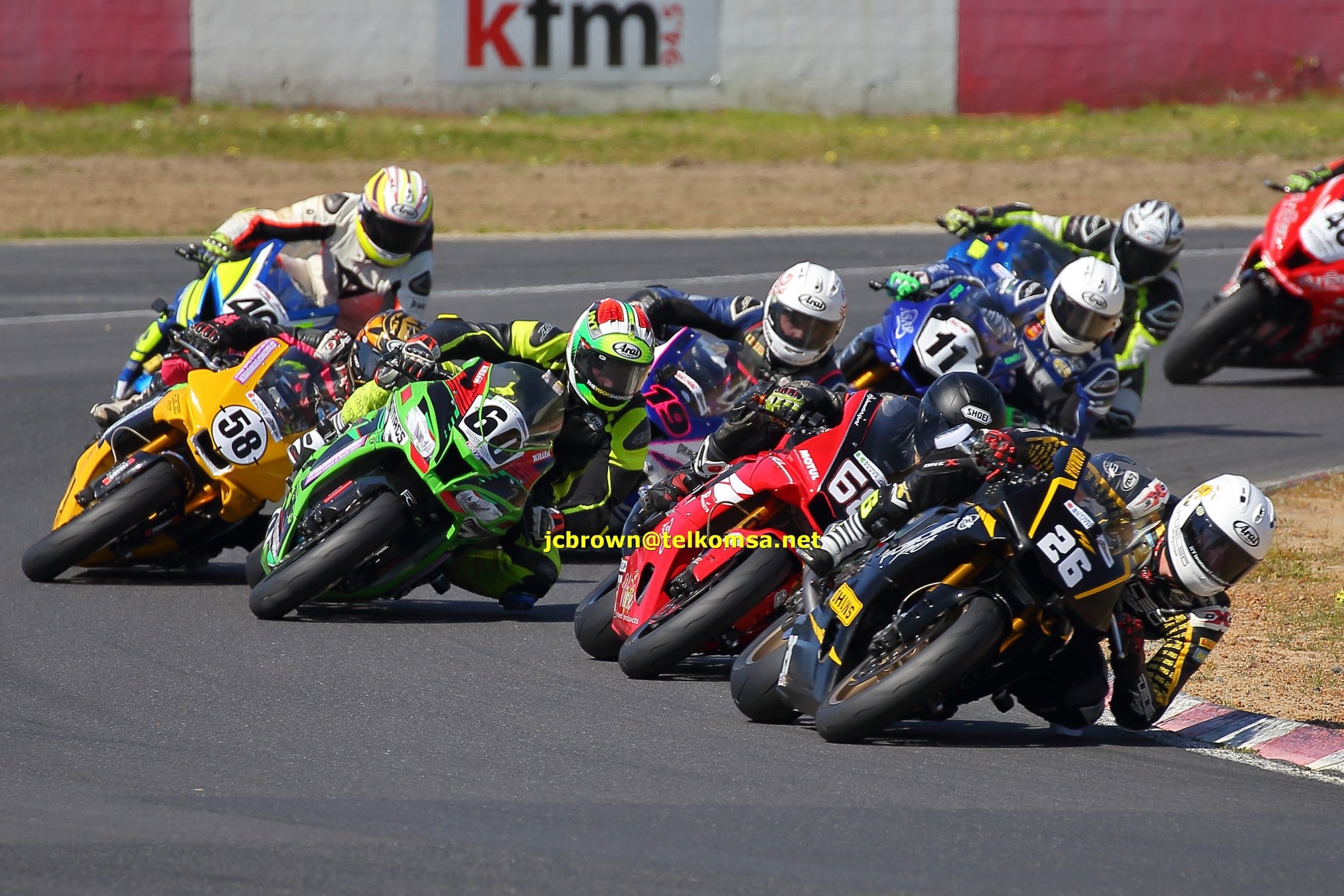 In only his second outing after a long layoff due to injury, 2016 and 2018 champion Brandon Haupt went out there with something to prove – and convincingly won both Superbike races on the Fueled Racing R1, while Jonas, with an eye on the main prize, rode to a safe second both times.

Not that safe meant slow; both riders qualified within a second of SA Superbike champion Clinton Seller’s ultimate motorcycle lap record for this circuit. Third in both races was Namibian Ronald Slamet, also a former Regional champion.

Super600 rivals Kewyn Snyman, the defending SA SuperJunior title-holder (Hillbilly R6) and Jared  Schultz (ASAP WORLD R6), fresh from a SA Super600 win at East London, put up two superb dices for 600cc line honours, the first of which ended decisively at the last corner when Schultz outbraked himself and went farming. In their second encounter, however, the two swopped places twice before Snyman led over the line by just 0.014sec!

The seemingly indestructible Malcolm Rapson and his family-funded Suzuki GSX-R1000 L7 led home the SuperMasters riders in both races, with Klint Munton a distant second.

Lubabalo Ntisana, who has dominated RST Trac Mac Clubmans racing this season on his LB Autos ZX-10R, made a slow start to the day after huge tumble in practice the previous weekend, qualifying fourth. He got his skates on in Race 1, however, finishing second to Shaun Mackrill (GFP Lighting ZX-10R) by a scant 0.028sec after a five-way battle involving Wayne Arendse (The JJ Smith Trust ZX-10R), Deon Ebel (Honda CBR1000 RR) and Dylan Croudace (Ducati Panigale) that had the crowd on its feet.

The second race was even closer, as Ntisana took over from early leader Arendse, and held him off to win by half a second, with Jonathan Schwerin (Suzuki GSX-R1000), Mackrill and Croudace in hot pursuit. The top four crossed the line within a second and Croudace was less than two seconds further adrift.

The RST Trac Mac Powersport races, by contrast, belonged to one rider. Talented teen Slade van Niekerk (prestige GT Graphics R3) romped away to finish both races well clear of second-placed Jason Linaker (Samurai Ninja 300). Clayton Adams was the best of the 650cc Class A riders, finishing a distant third in each outing.

Franco Donadio’s all-conquering Ford Escort qualified on pole for the Millstock Classic and Shatterfix Fine Car races, more than two seconds quicker than anybody else, but wound up debating second with Charles Arton’s Datsun 240Z for most of Race 1, until he had a coming-together with a back marker on lap seven and was forced to retire. Meanwhile, Rudolf de Vos and his Chev Can Am walked away to to win by almost 10 seconds from Arton and Trevor Momberg (Ford Capri). 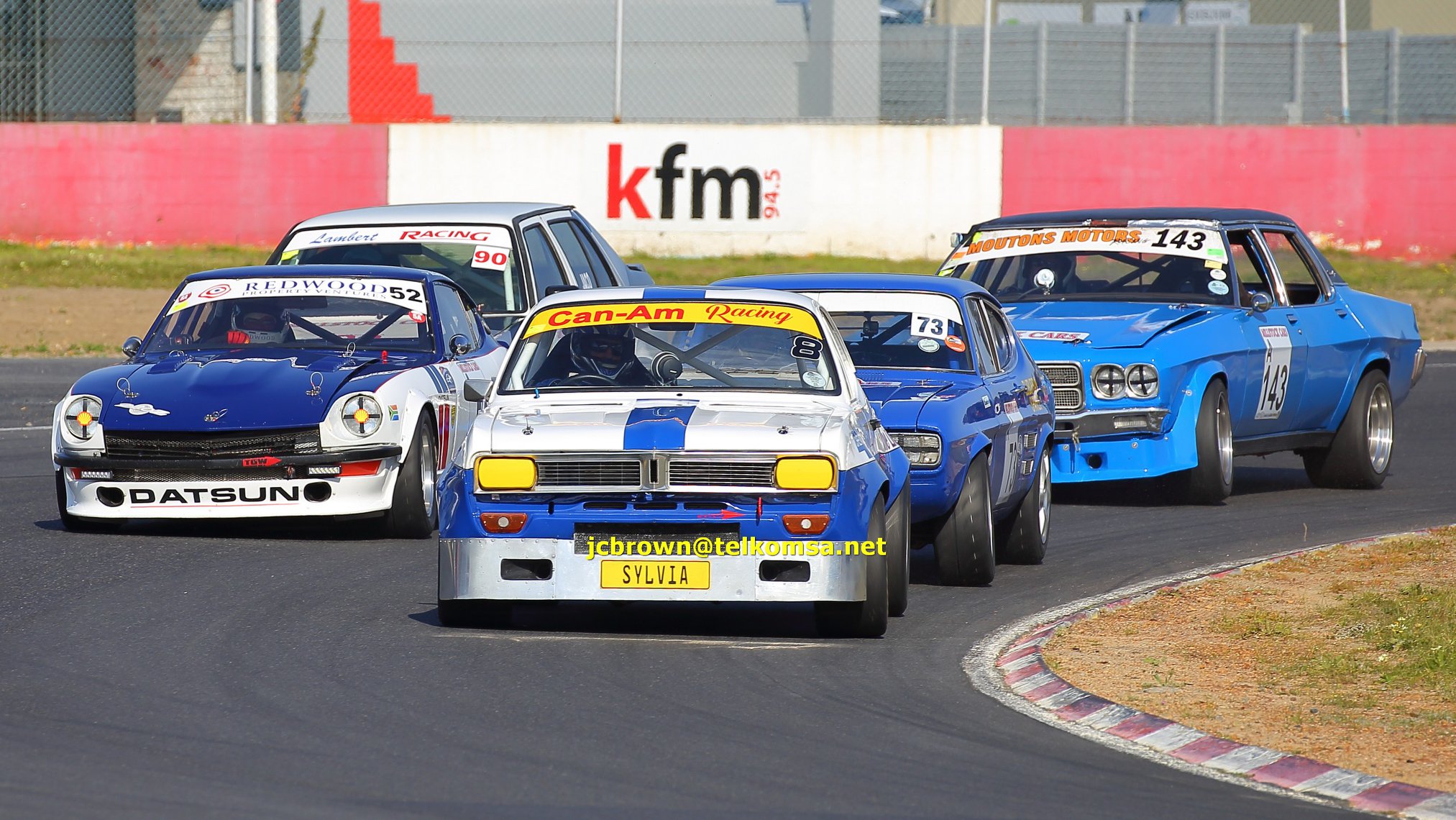 Donadio did not come out for Race 2, handing the advantage to De Vos’ thundering “Little Chev”, as he romped away to win by almost 12 seconds from Arton and Momberg, who finished just 0.322sec apart after the dice of the race, while Lambert, Toscano Sr, Phillips and Ernest Leite (Fiat 128 Rally) were the top four finishers in the Fine Cars category.

Craig Jarvis put the Maui Motorhomes Ginetta G57, officially the fastest car around Killarney, on pole for the Pirelli Sports & GT races with a qualifying lap of 1min08.727, nearly four seconds quicker than anybody else. He then spun out of the lead on lap one, and spun again in G-Energy corner two laps later.

This time the car stalled, so there it stayed until the end of the race, while Dawie Joubert in the  ‘giant killer’ Honda-powered Lotus Exige cruised to an unchallenged win, 18 seconds ahead of a furious dice for second between Gary Kieswetter (Advanced Packaging GT3 RS) and Gavin Gorman’s two-litre Volkswagen powered Nardini, with Kieswetter ahead by a nail-biting 0.393sec when it counted.

Sadly, Joubert did not come out for Race 2, leaving the field open for (a somewhat more cautious) Jarvis to finish 16.775 seconds ahead of Steve Humble (Harp Pilbeam MP84) and the Porsche GT3 Cup machines of Maarten Prins and Andre Brink.

Nian du Toit parked his GTi Challenge car for the Makita Supercar races, to lead the field home in a lights-to-flag Race 1 win, ahead of Ryan McCarthy and Andrew Moffitt. He got it all wrong on the opening lap of Race 2, however, and started lap two second last.

That set the stage for a thrilling fightback drive that saw Du Toit move up to sixth on lap two, fourth on lap three and third on lap five. He was unable to reel in the leaders in the few laps remaining, however, and had to settle for third behind McCarthy and Glen Philllips.

The Formula Libre single-seater races were, as usual, a Dee-Jay Booysen benefit, as he brought his Dico RM08 home well clear in both races, while Byron Mitchell (Dolphin Forza 1.4L) and Ashfaak Dawood (ERA Racing Sting 1.4L) fought it out for second, finishing in that order both times.