The third round of the Western Province Motor Club Short Circuit Series at Killarney International Raceway on Freedom Day, Saturday 27 April, was certainly free of boredom, with tight, closely fought racing in each of the four classes contested on the day – and a number of spectacular tumbles, fortunately without serious injury.

The CBR150 Juniors for riders under 18 contributed more than its fair share of drama, with David Lindeman winning all three races by very narrow margins, followed home in Race 1 by Slade van Niekerk and Connor Hagan after a superb last-lap showdown.

Race 2 saw Lindeman’s winning margin cut down to less than half a second, with Hagan posting the fastest lap of the race in lap eight and closing to just .45sec behind the leader at the line, with Van Niekerk a close third.

Hagan did even better in Race 3, setting the fastest time of the day for the class with a blistering 40.802sec in lap four, but just couldn’t get past Van Niekerk at the death to take second – although there was only 0.292sec in it at the line.

However, three riders including Hagan were later excluded, handing third overall to Nicholas Hutchings, behind Lindeman and Van Niekerk, with Abigail Bosson fourth for the day despite a tumble in  Race 3 that left her with a sprained ankle. Gareth Dawson and Raymond Alexander dominated the CBR150 Seniors races, with Dawson in front when it counted in all three races – by less than 0.4sec in each case! – after three changes of lead in Race 1, one in Race 2 and one in Race 3.

The final was a real thriller, with at least one kamikaze passing move on every lap; Dawson and Alexander deservedly took first and second for the day, while two thirds and a sixth secured third overall for Robin de Vos.

Reigning South African SuperJunior champion Kewyn Snyman (Westman SR500) knows a thing or two about racing Super Singles; he was two seconds a lap quicker than anybody else in Qualifying and ran away with Race 1 to win by 16 seconds from Tony Sterianos (Honda CBR250) and Nicholas Hutchings (KTM 390).

Then he brought his day at the races to an unplanned early close with a huge tumble in Rose Sweep in Race 2, leaving Hutchings and Sterianos to fight it out for line honours in the restart and Race 3. The big silverware went to Sterianos after three solid rides, with Peter Hill second and Hutchings third, despite winning two races. 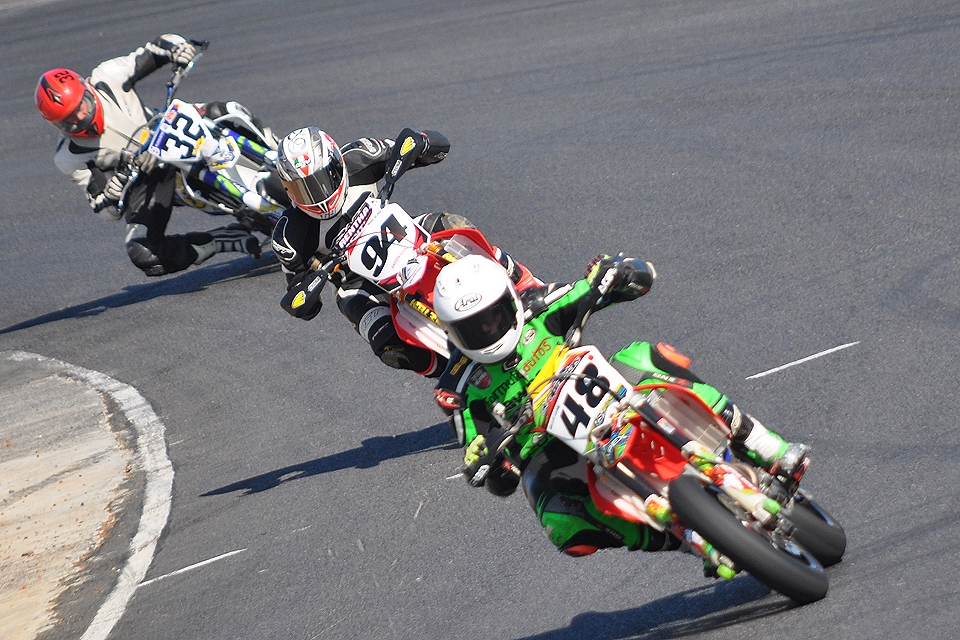 There was more drama for Snyman in the first SuperMotard race, when he lost drive due to a transmission breakage on his Yamaha and crashed out of second in the Bus Stop on lap three. After that the class belonged to Jurgen van Onselen (Yamaha) and Franco Flach (Husqvarna), who put up three magnificent duels, with newcomer to this class of racing Gareth Gehlig (Kawasaki) a hard-fought third overall for the day.