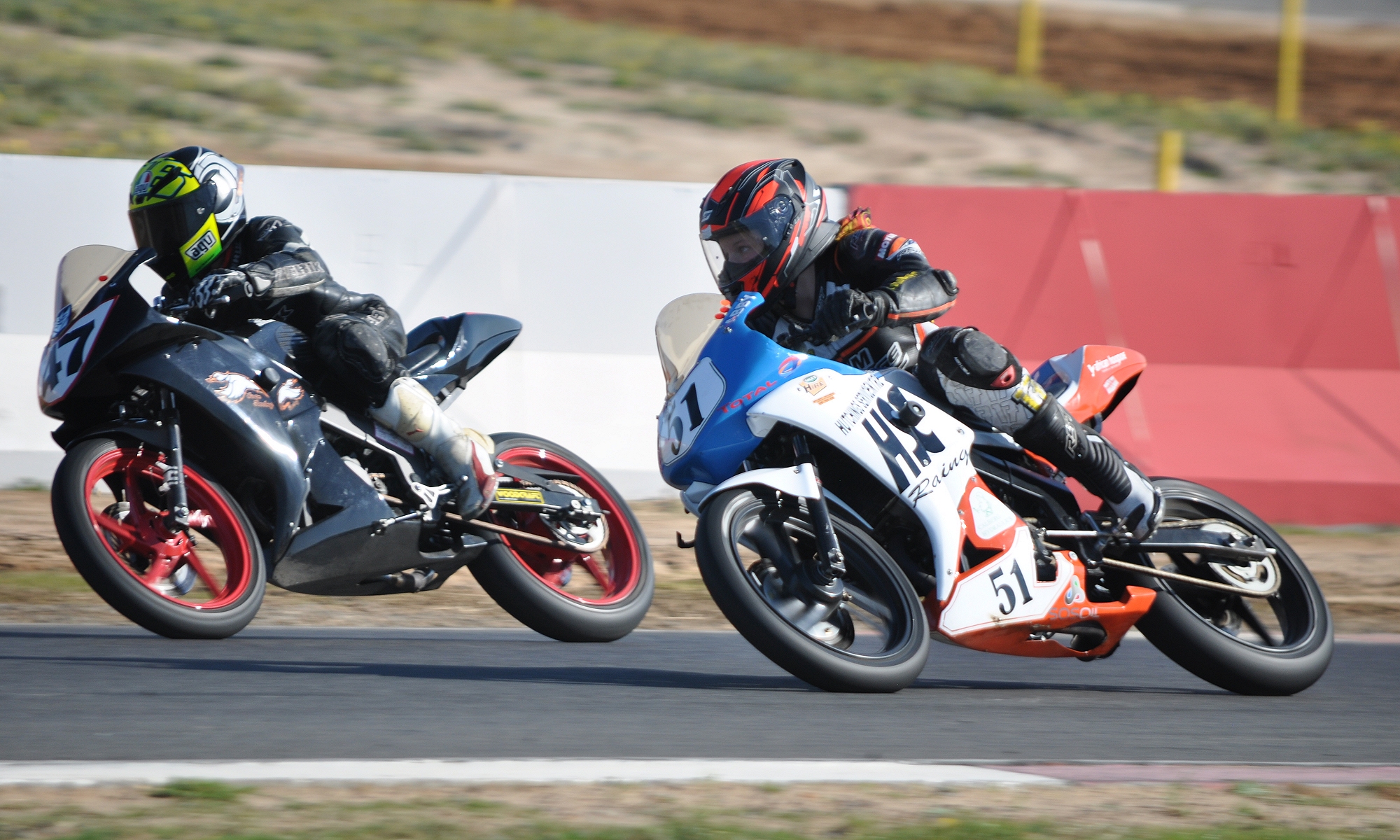 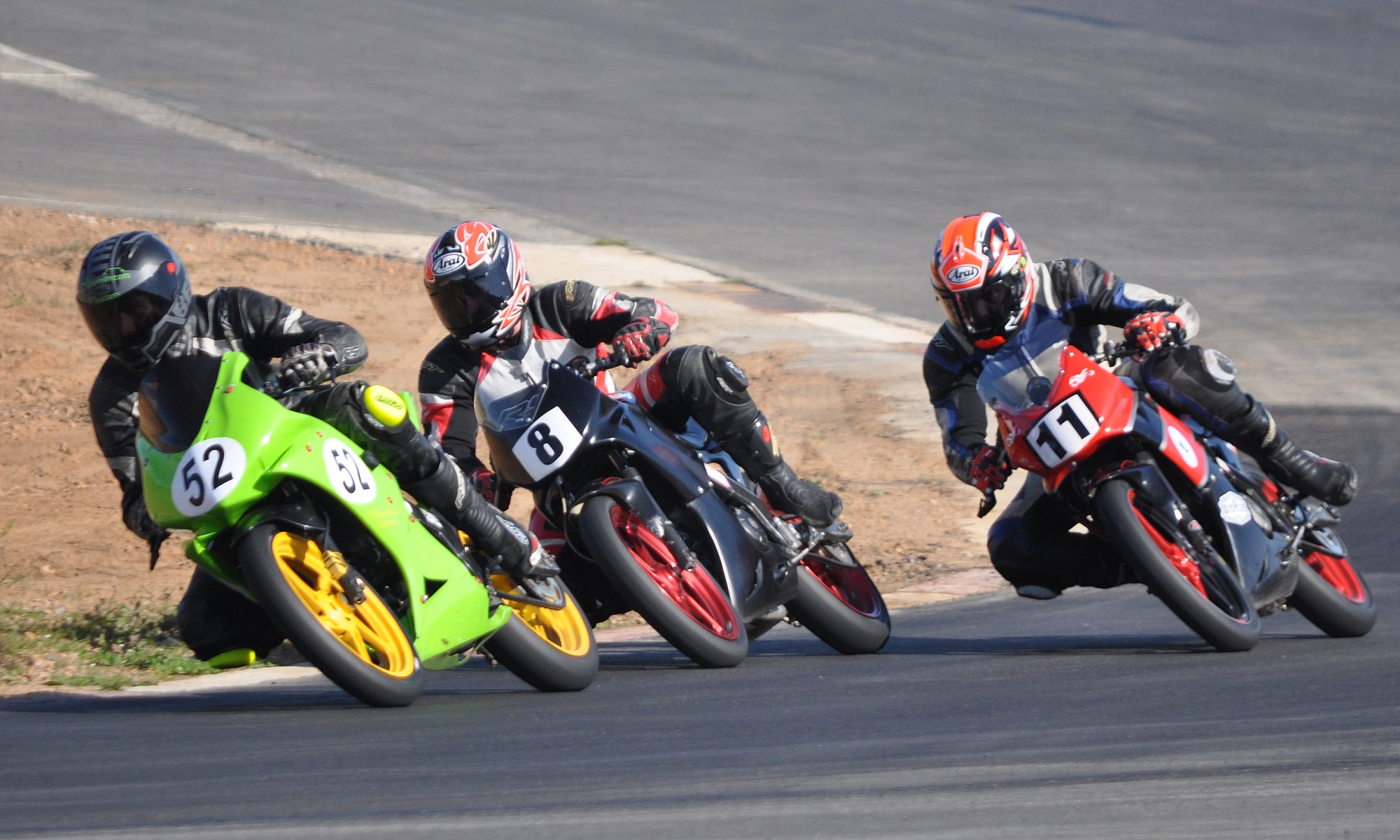 A close-fought one-hour endurance race topped off a full day of exciting racing at Round 7 of the Short Circuit Racing series on Saturday 24 August 2019 at Killarney International Raceway. All the teams were on identical Honda CBR150 machines, so the race came down to consistently fast lapping and well-managed rider changes.

The winners, having completed 83 laps of the 1.3km circuit in the hour, were teenager Slade van Niekerk and Mad Macs Superbike rider Trevor Westman, himself a short-circuit graduate.

Just one lap behind were two more teen hotshots, David Lindemann and Jessen Samaai. The result would have been even closer had it not been for a slow rider change shortly after Lindemann had put in the fastest time of the race (a blistering 42.234sec) on lap 18 and put the No.33 bike briefly into the lead.

Third was the unlikely pairing of veteran Peter Hill and reigning South African SuperJunior champion Kewyn Snyman, on the same lap as the Lindemann/Samaai machine after a superb second stint by Snyman.

Earlier, Van Niekerk had won all three CBR150 Junior sprint races, with Lindeman a close second in each case. Abigail Bosson passed Jo Swanepoel after Nicholas Hutchings crashed out on lap two and went on to take third.

Hutchings finished third in Race 2, while Bosson crashed out of fourth on lap seven. The final showdown, however, was a real thriller; Lindeman led until lap six, and came home just 0.329sec adrift, while Hutchings crashed out of third on lap four and remounted to finish stone last. Bosson, who was riding with an injured left hand, and Swanepoel swopped places three times in the final four laps, with Swanepoel ahead by just 0.085sec when it counted.

Gareth Dawson led the first CBR150 Seniors race from lights to flag, chased all the way by Robin de Vos and David Vismer, all of whom finished within 0.751sec, while Raymond Alexander got the better of a race-long dice with Willy van Niekerk to take fourth by a scant 0.067sec.

Race 2 saw Dawson win by a convincing 2.347sec, while De Vos worked his way up from a poor start to take second on lap six, only to lose it to Vismer by 0.38sec. Raymond, meanwhile, had to settle for fourth after an almighty battle with De Vos in the middle part of the race.

That got Raymond really fired up, and he took the fight to Dawson and Vismer in Race 3, finishing a desperately close second to Dawson after 10 close-fought laps, with Vismer a distant third after dropping back in the closing stages.

Jurgen van Onselen (Yamaha) took a clean sweep of the Super Motard races, but was made to work very hard for it by main circuit hotshot Gareth Gehlig (Honda) who came up from fourth in the first outing to finish only five seconds adrift, while Malcolm Cochrane (Husqvarna) dropped back from an early lead to finish a close third.

The second leg was a straight chase as Gehling recovered from a poor start to pass Cochrane on lap four and close to within 3.546sec at the flag. Cochrane did not come out for Race 3, however, leaving Gehlig to keep Van Onselen honest. He finished just 2.225sec adrift after a hard chase, with Regan Mitchell (KTM) a distant third.

Peter Hill and David Vismer made all the running in the Super Single races, with Hill winning Race 1 from Wesley Blake by more than a lap after Vismer went out on lap six. Vismer made up for that, however, by chasing Hill all the way home in Race 2, briefly grabbing the lead at one point and finishing just 0.351sec adrift after a superb ride, with Blake a distant third.

Vismer finally came right in the final outing, swopping the lead with Hill several times during a hard-fought race – but it was the younger rider who was in front when it mattered, leading Hill over the line by 1.589sec.

The Formula M races provided a fascinating illustration of the ebb and flow of fortunes in motorsport. Shaakir Holliday was out for the first time after replacing the 400cc four in his car with a screaming Yamaha R6 engine. Impressively quick though it is, the car lacks development, with the final drive chain coming off its sprockets several times during the course of the day.

Holliday gave us a preview of the car’s potential in Race 1, leading every lap except the final two and coming home only 1.142sec behind class leader Ryno Pentz, with Craig Hume a close third. He then dominated Race 2, only to drop out on the last lap, handing the win to Pentz with Hume less than half a second adrift and Roy Reed a distant third.

The Yamaha-powered M was running away with Race 3 when the chain came off (again!) on lap six; Pentz had already got it all wrong on lap two and was running stone last at one stage, but put in a mid-race charge to pass Hume four laps from the end and take the win by six seconds, with Reed way down in third