Posted at 11:50h in Latest News by editor 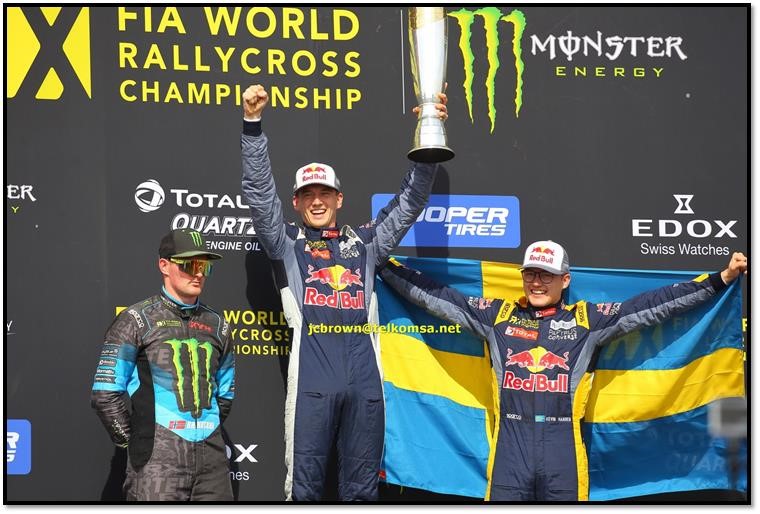 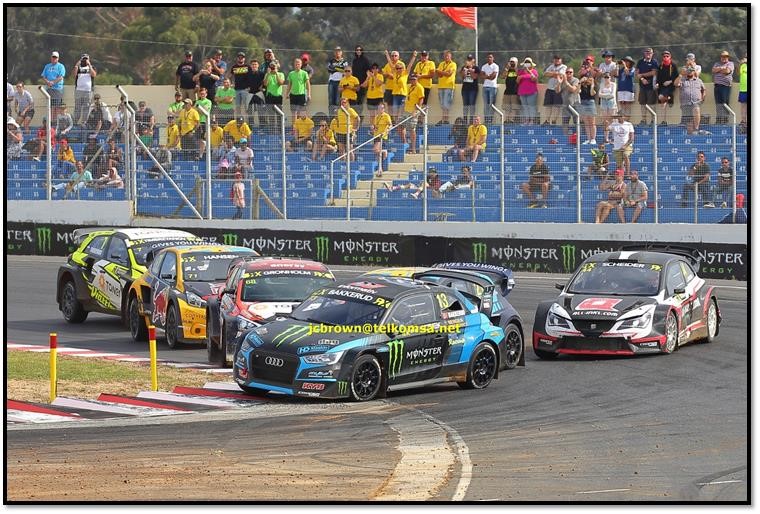 Timmy Hansen has been crowned the 2019 FIA World Rallycross Champion on a count-back of wins from Andreas Bakkerud after a dramatic Final at the SABAT World Rallycross of South Africa at a sweltering Killarney International Raceway on Sunday 10 November – so dramatic, in fact, that the result was still under review by the race stewards on Sunday evening, but was eventually confirmed.

The Cape Town crowd was treated to a spectacular and bruising season finale as the two finished level on points with Bakkerud second in the Final behind winner Niclas Grönholm and Hansen fourth behind Timur Timerzianov after 60 races in 10 countries on four continents through 2019.

Saturday and Sunday’s qualifying races did little to shake things up; determined Finn Niclas Grönholm (Hyundai) was in scintillating form as he pipped Timmy, Bakkerud and Kevin Hansen to second third and fourth respectively in the point-scoring qualifying races.

That meant Timmy Hansen’s world championship advantage was up to two points over Bakkerud with Kevin Hansen a further six points behind as the top 12 lined up in two six-car Semi Finals – with more championship points at stake.

Grönholm faced off against Bakkerud and Russian Timur Timerzianov in the second Hyundai, with Latvian Janis Baumanis (Ford), Hungarian Kriztián Szabo (Audi) and Swede Anton Marklund (Renault) behind them in the first Semi Final, but Bakkerud made a perfect start and held on to take the win in spite of intense pressure from Hyundai team-mates Grönholm and Timerzianov.

The second Semi Final saw the Hansen brothers safely on the front row ahead of German Timo Scheider (Seat), the Renault duo of Frenchman Guerlain Chicherit and Belgian Guillame de Ridder, and Brit Oliver Bennett (Mini) as Timmy made off for the win with Kevin on guard and Scheider third.

All of which meant Timmy Hansen was leading the championship by two points with only the final left to race and eight points on the table. Hansen started the final from pole position from Bakkerud, Grönholm, Kevin Hansen, Timerzianov and Scheider as the top six lined up two-by-two to decide the world championship over six scintillating laps in sweltering heat under the backdrop of Table Mountain.

Bakkerud made a perfect start to lead from a combative Timmy Hansen, but the two collided at the bottom hairpin to see Grönholm take the lead from the recovered Bakkerud, Timerzianov and the similarly recovered Timmy Hansen.

Kevin Hansen and Scheider then had a spectacular accident at the same corner where his brother and Bakkerud had collided, as Grönholm led a disgruntled Bakkerud, Timerzianov, and a limping Kevin Hansen home after Scheider stopped.

Timmy Hansen’s reaction to the first question at the post-race media conference was: “It sounds fantastic – almost unreal – that you call me world champion.

“I am super happy for the sport – the last race with everything on the line was nerve wracking, but I kept focussing and delivered strong performance race by race through the weekend – there was no room for error – not the smallest mistake.

“I know Andreas is upset,” he commented on the Final race incident. “I went for the inside, it was a hard move and it still needs to be investigated.

“But this season is the best in my career with four race wins and now the title – it’s a deam come true and I am so happy for the team – we are first and third in the Drivers’ title with Kevin and me and we are Manufacturers’ champions too – the car has been brilliant every race.

Bakkerud commented: “I am proud of myself – I won the battle today – the best reaction at the start to lead away.

“But unfortunately I will not comment more after what happened and I just want to say huge thanks to my team and our sponsor and to everyone else – especially Cape Town – it was fantastic as always. Thank you South Africa.

“For the rest, right now I don’t really care.”

A delighted Grönholm, who missed two midseason races due to illness, said: “It’s great to get a proper win at last. My first win was after someone else was penalised, so this one is special – my first chequered flag victory!

“I’m really happy with the car and the big step the team has taken – they worked their butts off to give me a good car and I have improved too – this is a great way to end the season.”

In other SABAT World Rallycross of South Africa action, Swede Oliver Eriksson delivered a dominant RX2 victory over Jamaican Fraser McConnell and Sami-Matti Trogen, to wrap up that title ahead of Ben-Philip Gundersen, who pipped Jesse Kallio to the runner-up spot.

Their cars freshly refurbished and looking smart for the for the occasion (at the start of the day, anyway!) they delivered four closely contested and incident-packed qualifying races, leaving the fans in no doubt that local rallycross is alive and well and living at Killarney.

Shawn Cope topped the timesheets after the first round of qualifying races on Saturday in the two-litre class with his Volkswagen Golf, a little more than a second ahead Steve Humble’s Opel Kadett, with Craig Jarvis of Maui Motorhomes Ginetta G57 fame just 0.310sec further adrift in a Peugeot 306.

The second round, however, saw Humble off to a clear win by almost seven seconds from Gareth Easom (VW Golf), with Sandro Biccari another 1.62 seconds further back in a Kadett. After two rounds Humble led the points standings with 95 points, 11 ahead of Cope with Abdurgamaan Amlay a close third in a Toyota Conquest.

Humble took the third qualifying race on Sunday morning by 3.678 seconds from Cope, with Jarvis a close third, setting up a tight final – but it was Cope who came through to win when it counted, beating Humble by a scant 1.843 seconds, with Biccari a further 4.212 seconds in arrears, after Jarvis had a disastrous final, finishing stone last behind Dewald Burger (Opel Kadett) and a misfiring Gareth Easom (VW Golf).

The E36 Cup Races were even closer; Robby Ferroli held a lead of just 0.060sec from Zack Groenewald after Q1, with Ryan Kat third, 2.631sec in arrears. The second round of qualifying races, however, saw Groenewald up the stakes with the only sub-50 second lap of the day by a local, to lead overnight on Saturday evening by 2.2 seconds from Kat and another 2.7 seconds from Riaan Smit.

Sunday morning saw Kat fight back to win the third qualifying race by just 1.912 seconds from Groenewald, with Ferroli a further 2.101 seconds back.

Groenewald then pulled out all the stops in the final to win by an emphatic 6.312 seconds from surprise front-runner Clint Rennard, with Kat less than a second further in arrears. Ferroli finished fourth for the weekend, ahead of Smit and Dylan Nel.

The only woman in the entire entry list, rally driver Megan Verlaque, gave all the ladies something  special to cheer about when she won the Speedcar buggy class to wrap up a stunning motorsport weekend.