Posted at 11:59h in Latest News by editor 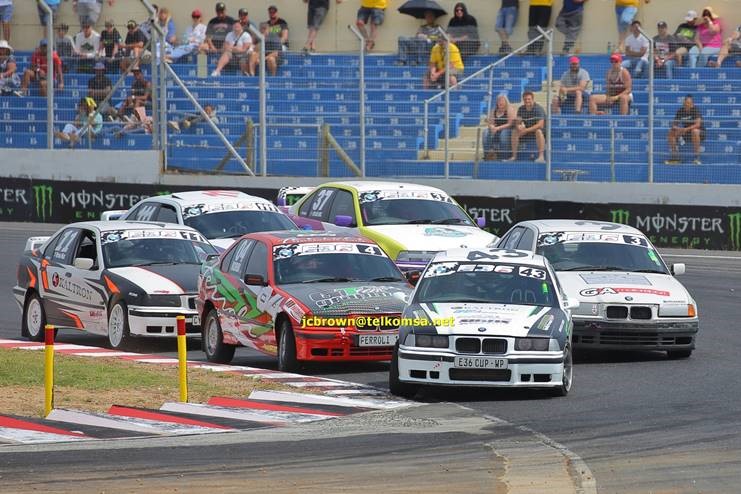 Their cars freshly refurbished and looking smart for the for the occasion (at the start of the weekend, anyway!) they delivered six closely contested and incident-packed qualifying races, leaving the fans in no doubt that local rallycross is alive and well and living at Killarney.

Shawn Cope topped the timesheets after the first round of qualifying races on Saturday in the two-litre class with his Volkswagen Golf, a little more than a second ahead Steve Humble’s Opel Kadett, with Craig Jarvis of Maui Motorhomes Ginetta G57 fame just 0.310sec further adrift in a Peugeot 306.

The second round, however, saw Humble off to a clear win by almost seven seconds from Gareth Easom (VW Golf), with Sandro Biccari another 1.62 seconds further back in a Kadett. After two rounds Humble led the points standings with 95 points, 11 ahead of Cope with Abdurgamaan Amlay a close third in a Toyota Conquest.

Humble took the third qualifying race on Sunday morning by 3.678 seconds from Cope, with Jarvis a close third, setting up a tight final – but it was Cope who came through to win when it counted, beating Humble by a scant 1.843 seconds, with Biccari a further 4.212 seconds in arrears, after Jarvis had a disastrous final, finishing stone last behind Dewald Burger (Opel Kadett) and a misfiring Gareth Easom (VW Golf).

The E36 Cup Races were even closer; Robby Ferroli held a lead of just 0.060sec from Zack Groenewald after Q1, with Ryan Kat third, 2.631sec in arrears. The second round of qualifying races, however, saw Groenewald up the stakes with the only sub-50 second lap of the day by a local, to lead overnight on Saturday evening by 2.2 seconds from Kat and another 2.7 seconds from Riaan Smit.

Sunday morning saw Kat fight back to win the third qualifying race by just 1.912 seconds from Groenewald, with Ferroli a further 2.101 seconds back.

Groenewald then pulled out all the stops in the final to win by an emphatic 6.312 seconds from surprise front-runner Clint Rennard, with Kat less than a second further in arrears. Ferroli finished fourth for the weekend, ahead of Smit and Dylan Nel.